In 1026 one woman dared to say No. It was a day like any other day, but to Robert the Magnificent, it would be a day he would remember for the rest of his life for he discovered Herleve (Harlette). Having caught his eye, he sent for her to be ushered into the Castle of De Falaise, via the backway.

Herleve declined saying she would only enter the Duke’s castle on horseback through the front gate, and not as an ordinary commoner. Days passed and the Duke of Normandy filled with passion and desire finally conceded. Robert the Magnificent could do nothing but wait for this beauty and after three days agreed to Herleve’s wishes. Harlette rode a white horse in the best finery her family could afford and took her place to begin a love affair that would be written about in books for times to come.

For Herleve (Harlette) became the Mother of England. Giving birth to William the Conqueror in 1028 at The Château de Falaise. A castle located in the south of the commune of Falaise (“cliff” in French) in the calvados department of Normandy, France. As the story goes although he never married her, he stayed faithful to her till the very end.

In 2005 amongst the backdrop of romance and royalty the heritage of Harlette DeFalaise was reborn in London, when Harlette™ Luxury Lingerie was founded.

Since then Harlette made its catwalk debut in Paris, followed by a Hollywood style lounge for the Oscars 2010. Pieces of the collection have been received by a Princess in Saudi Arabia and featured on a TV show in United Kingdom.

The romance, the royalty and French history is the foundation for the Harlette company and each of the labels

The creative director of Harlette and innovation patent designer, says Harlette is all about luxury, sensuality and elegance. Harlette concentrates on “How do you feel?” and “How is the piece transforming the client when she wears it?” In essence, letting you unleash the naughty romantic within.

The concept for Harlette came about when research showed there was a huge gap in the lingerie market, for lovers of lingerie who were looking for pieces that were unique, romantic and a work of art. Made from lavish fabrics and trimmings, with inspiration from Hollywood, Royalty, the Tudor and Baroque periods and anything French of course, Harlette’s extravagant designs are perfect for the discerning lingerie-lover.

The Harlette Collection, concentrates around the concept of luxury layering, starting with a lingerie set then building around a work of art with a signature housecoat or kimono. These house coats as seen on the wonderful Billie Piper the hit TV show Secret Diary and kimono’s includes fabrics and adornments in embellished crystal-beaded French lace, silks, Italian jewel-encrusted tulle, velvets and of course Marabou, Ostrich and Peacock feathers.

Harlette says there is always a return to opulence and decadence, women want to be loved adored and admired. A piece from the Harlette collection transforms you instantly into the place that dreams come true.

Working one-to-one with clients to make their dreams come true, every piece is handmade so it becomes the client’s own signature piece. Harlette’s clients are from all over the world, including Middle East, USA, Europe and Asia. 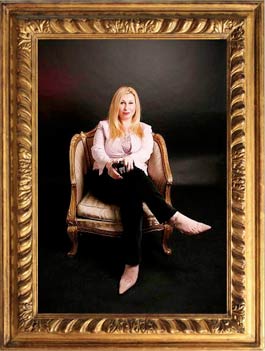